Join the university community in celebrating the history and cultural expression of the people of various South Asian countries including, but not limited to, Afghanistan, Bangladesh, Bhutan, India, the Republic of Maldives, Nepal, Pakistan, and Sri Lanka!

Remember when a certain celebrity's shirtless selfie presented itself as the largest threat to humanity in 2020? Well, little did we know about the chaos that would later ensue on every part of the globe. Living "virtually" has dramatically changed how we experience life, but we have made it this far through boundless connections in an online world.

Whether we are six feet or 8,000 miles apart, the digital world has allowed us to maintain relationships with the people we care about most, even if family is a flight or more away. As we navigate a new world, social media has given us a platform to connect, speak out against injustice, and find strength through unity: one post, repost, retweet, or like at a time. Those small acts of support add up. You can never get too lonely. Your parents, your best friend, even your Nani is just a FaceTime away!

In a year like no other, staying apart does not have to mean losing our connections. Despite the turmoil driven by the global pandemic, we can stand united with one another. Join the SAHC in being "Connected… but Six Feet Apart" virtually throughout March and tune into conversations on the topics that keep us connected, using the platforms that allow us to do it whether we are in the same town or across the globe.

Find the full calendar below. 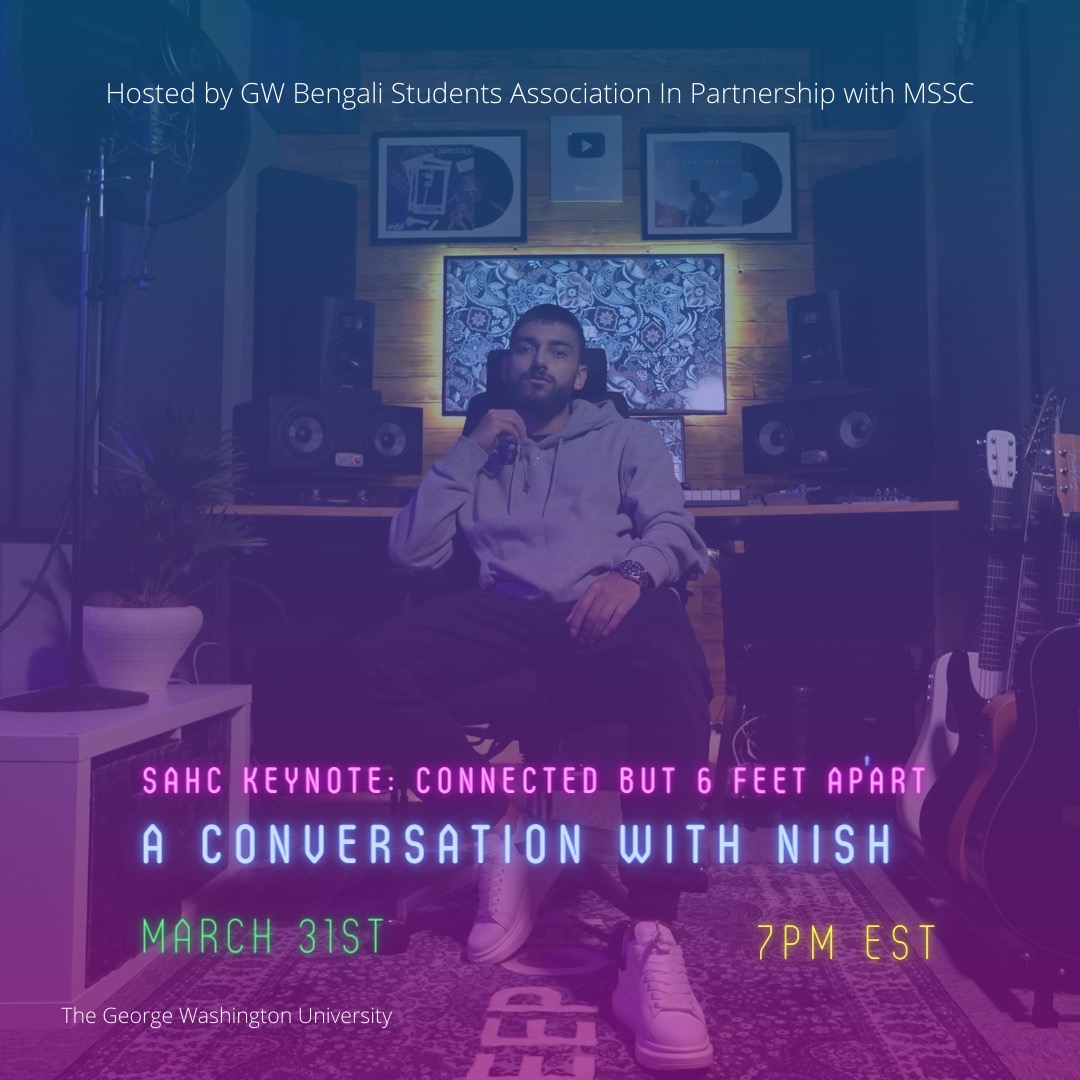 During this interview-style keynote address, we will discuss the increasing presence of South Asians in the music industry from Nish’s perspective, as well as how music has made him closer to his Bangladeshi roots. Read more about Nish and his journey as a South Asian music artist below! 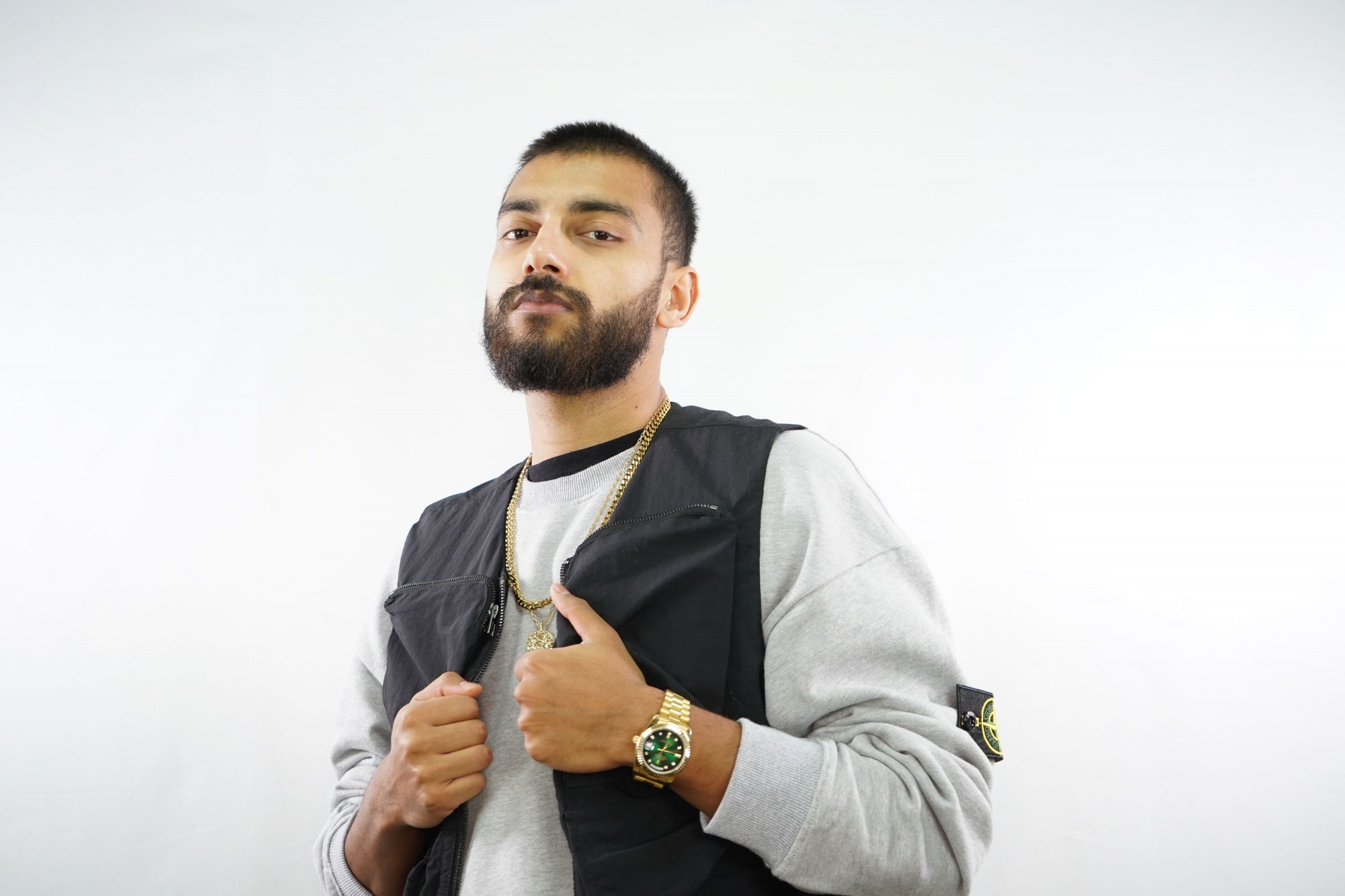 Nish is a British singer, songwriter, guitarist, and pianist of Bangladeshi descent. He made his official debut in a Bengali refix of Mumzy Stranger's original song, "Jaan Atki" which became the first Bengali track to reach number 1 on the iTunes World Charts.

He is an urban Asian artist known for his ability to provide a contemporary twist to popular music, describing his career as "pioneering a new brand of Bangla music and creating mixes of popular Hindi, English and Punjabi songs with Bangla lyrics". Under the stewardship of British Urban artist Mumzy Stranger, he released his debut single, a Punjabi language song named "Manja", on 24 March 2017 which instantly became number 1 on the iTunes World Charts, as well as making a debut top 10 entry in the official charts. His debut Bangla single, "Love Lost", which released on 22 February 2018 was also the first single from his debut album titled "Identity" and topped the iTunes World Charts within 40 minutes of releasing.

He went on tour to Sylhet in 2017 and performed in Bangladesh's first NRB Global Business Convention. The following year, he featured on a track by American singer Muza called "Pola Bangladesh Er" which was signed to Bangladesh's largest urban record label, Qinetic Music. Nish has also been making a name in Bangladesh, where he went at the end of 2019, doing three shows in the capital Dhaka.

He has performed the prestigious Newham Under the Stars music festival in east London in the summer of 2018, and in March 2019 he performed as a supporting act to Mumzy Stranger at BBC Asian Network's annual live show at Arena Birmingham.

In 2020 one of his songs "Standing by you" went viral on TikTok and YouTube with 21 million views and 8 million Spotify streams worldwide, along with a recently released song "Kache esho na" with 4 million views to date.

Nish has been the first to launch a Bengali playlist on BBC Asian network in 2020, which has never been done by any former Bengali artist.

Nish’s more currents projects titled "Homecoming" (2020) and “Jungle Fever” (2021), joint with producer DJ LYAN, have also had an increasing impact on the music scene, as all three songs from “Jungle Fever” were added to mainstream Spotify playlists “Who We Be”, “New Music Friday”, “This Is How We Do” and “New Pop Revolution”.

He is now closely working with Mumzy stranger and DJ LYAN on up-and-coming projects. He is also working on collaborations with various other international artists, as well as a potential album for the end of 2021.

It’s about time we discuss the positives and negatives of the infamous online space known to many of us: Brown TikTok. From Karchill stans to toxic brown boys, we've observed a lot of out of pocket influencers who have reconstructed our perceptions on South Asian identity. While some feel it is a safe space, others would argue otherwise. Join GW PSA as we debate Brown TikTok and how it has shaped our attitudes and communities! GW Pakistani Students Association (GW PSA)

Join us for a personable discussion in which the entire Sikh Student Association will act as a panel and answer questions about the ongoing farmers protests. The questions will foster a personalized experience for those not in the Sikh community, in order to empathize with the hardships currently being faced in Punjab. This safe space will allow members of SSA to express their grief and give attendees unique insight to the protests with the end goal being increased awareness and advocacy. GW Sikh Student Association (GW SSA)

Folk Cryptography in the Global South: On Dissent in India

What would it mean to decolonize our connections? As part of the GW South Asian Heritage Celebration, Dr. Sareeta Amrute (Associate Professor of Anthropology at University of Washington; Director of Research at Data and Society) will present her latest work that investigates the material and sensuous infrastructures required to sustain dissent. Situated with scholarship in feminist science and technology studies, her work continues to ask us to reorient our narrative frames about digital technological networks outside traditional centers of power. Join the GW South Asian Society for this critical talk followed by a discussion moderated by Dr. Diana Pardo Pedraza from our very own Department of Anthropology. South Asian Society (GW SAS)

A Conversation on Hindu Nationalism

Join HSA to discuss the effects Hindu Nationalism have had in India and in the United States. What connects these two issues, why has it become such a prevalent issue, and what can be done? Join us to discuss why a religion used to connect has grown such a large group seeking to divide. GW Hindu Students Association (GW HSA)

More than Meets the Eye

Join GW's Indian Students' Association to discuss how the homogenization of mainstream Indian culture has led to the misrepresentation of various communities and the South Asian diaspora! Come chat with us about how communities within South Asia have been generalized through various forms of cultural representation India has to offer: food, film, music, dance, and visual art. We welcome people of all backgrounds to come learn and share their experiences. After all, Indian culture is far from monolithic, and really is more than meets the eye. We hope to see you all there!

Feeling stressed after all those midterms and papers this month? Come join BSA and destress with our Virtual Trivia/Speed Dating event! This event will be a mix of trivia night and speed dating where people will start off with playing some trivia (the winner will get a prize!), then they will be divided into breakout groups for one-on-one conversations to connect and finally end the night with playing some fun games: Among Us and Skribbl.io!! This will be a fun and chill event for people to relax and play some fun games after a stressful month while getting to know other people! We will include some ice-breaker topics and divide groups based on the game they want to play! You don’t want to miss this! GW Bengali Student Association (GW BSA)

Charity Formal has been recoded! Log in with SAS for an interactive virtual music festival powered by WRGW, featuring a live performance from Raveena to raise funds for DC Mutual Aid Network and the Asian Pacific Islander Domestic Violence Resource Project. Check out @sas_gw on Instagram for more information on how to access the space and a chance to win a meet and greet with our headliner! GW South Asian Society (GW SAS)